On March 14, 2019, our Murphy lost his fight against cancer. He took his last breath while being held in his daddy’s arms. We are completely heartbroken by this loss but are grateful that he is no longer in pain. We are blessed for every day that we had with our sweet sweet Murphy.  We will never forget his sweet face, his soulful eyes, his endless carrot squeaking, his booty shaking tail wag, his unstoppable appetite, turf wars with his brother over toys and dog beds, his belly rub rollovers, his search for the perfect sunning spot, his sweet stinky kisses or his equally sweet snoring. Murphy was 11 lbs of pure joy that would always bring a smile to your face.  Murphy we miss you so very much and while you may be gone you will forever live in our hearts and never ever be forgotten. You will always be the best boy.

On June 24, 2017, Landshark and El Diablo traveled to the San Diego County Fair at the Del Mar Fairgrounds to compete in the Wienerschnitzel Wiener Nationals 2017.  There were 8 trial races leading up to the main event.  El Diablo placed 2nd in his trial race and was eliminated.  Landshark in one of the most exciting trial races of the day was in a third way tie for first when crazy wirehair Fritz decided to sideswipe some competition into Landshark sending Landshark off his feet and rolling off the course into the crowd. All the excitement led to confusion and Landshark was able to get back onto the course and finish in first moving him into the main event.  The championship race was a line up of racing All-stars to include previous champions such as Mila Miesner, Ezri Miesner and Tootsie.  It was a VERY close race but in the end Mila won by a nose!!

This is a throwback to when El Diablo raced at the 20th Annual Wienerschnitzel Wiener Nationals on July 18, 2015.  Brewski Bros Racing’s team videographer Mike Williams shot the video of the racing demon El Diablo.

Below is El Diablo’s audition story that earned him the right to compete.

The Story of El Diablo

Cerberus in Greek and Roman mythology is the guardian of the gates of Hades.  He is a three headed dog with the tail of a serpent and the claws of a lion.  It is this gigantic hound which guards the gates to Hell to prevent ghosts of the dead from leaving the underworld.  The Cerberus is one of the great Greek monsters and it is believed that it is from this great monster that El Diablo was born into the world.

The legend goes that this hell hound sired only one living son and that son was the magnificent El Diablo.  Sadly, Cerberus was angered that his only son to survive birth was the runt and as such El Diablo was cast out of Hades in shame to wander the Earth.  In his time spent on Earth El Diablo learned to appreciate the small things in life but still was unable to shake the humiliation of being cast out of his home in Hell.  While he may have been a runt he was strong willed and determined to win his place back at his father’s side at the gates of Hell.  It was this relentless desire that pushed him to work on his ability to strike fear into the hearts of humans with his ferocious growl, swift speed and booming bark.  He also discovered that he could control any mortal that looked into the deep inky pools of his eyes and no human could fight his lightning fast Cobra strike kiss.

It is El Diablo’s wish that he be allowed to compete in the 20th Annual Wienerschnitzel Wiener Nationals so that he may attain the glory that has hid from him for so long and so that he may have his chance to return to Hades and be welcomed into his father’s claws as a champion. 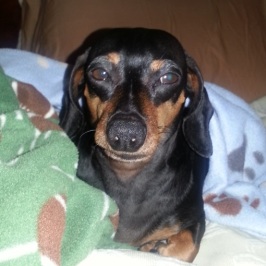 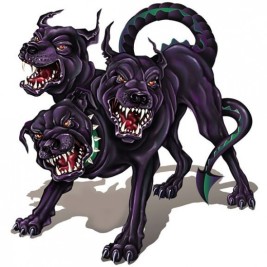 Some photos from race night!

For the first time in 5 years Landshark has qualified in the top 16 fastest times at the San Diego Wienerschnitzel Wiener Nationals and will compete at Del Mar Race Track on November 8th. 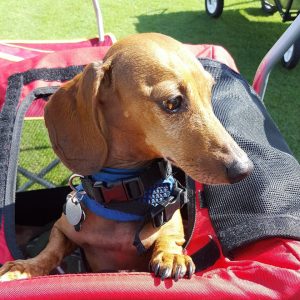 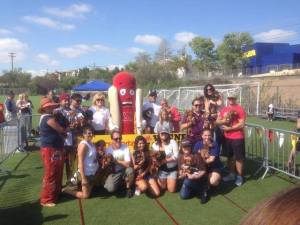 Last summer LandShark and myself, El Diablo were approached to appear in the sequel to 2013’s Wiener Dog Nationals movie.  The sequel which will premiere in Los Angeles at the Grove on March 26, 2015 is titled The Wiener Dog Internationals and continues to follow the story of Shelly a rescue Dachshund and her racing adventures with her adoptive family.  Since we had so much fun filming the first movie we jumped at the chance to play barking scenery in the sequel.

I always knew I would be a star outside of my own mind and it was about time the world started to notice!  We were cast as the racing delegates from Egypt and Kenya and had costumes to represent our countries.  And I must say Kenya has never looked so bad ass thanks to me.  LandShark really lucked out because he looks just like Mila Miesner the main star dog and so he got to play one of her back ups as the lead dog Shelly.  Not because he’s talented but because he’s smaller and lighter and the kid actor could hold him easily (lucky dog).

We’re really excited to see the finished product this March, the trailer was released a couple months ago and we both made it into the race scenes and LandShark made it into a scene as Shelly so he’s super stoked.  Below are some photos from the set and the photo shoot we did in our international costumes.

~ El Diablo, the most interesting Wiener in the world 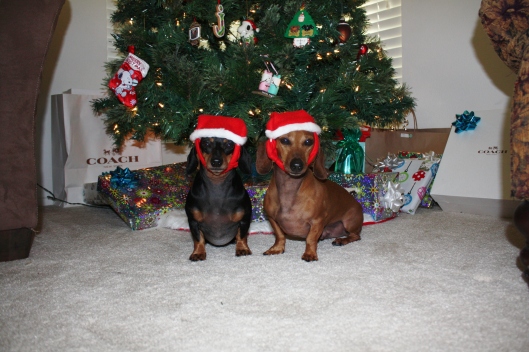 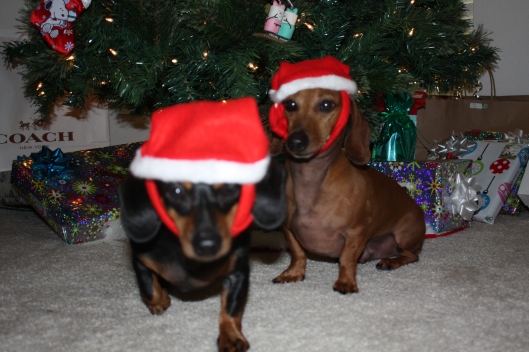 It all starts with the story of a tiny red dog named LandShark who aspires to one day triumph and beat the odds like his hero Seabiscuit.

LandShark, the story of an underdog…

LandShark’s story isn’t much different than that of his hero, champion Thoroughbred racehorse Seabiscuit. Just as Seabiscuit was an undersized and overlooked horse LandShark is a smaller dog, a miniature in his breed and as a result is often disregarded.  LandShark too has had an inauspicious start to his racing career and has been the butt of many jokes and suffered many heartbreaking losses to larger stronger Dachshunds.  Most recently was his loss at last year’s Wiener Nationals when he chose to do stop just inches from the finish line and retreat to the starting gate.  LandShark aspires to become a champion much the way Seabiscuit did and to become a symbol of hope to many Americans and fellow wiener dogs.  Seeking to redeem himself in the eyes of his fans due to last year’s defeat LandShark is hopeful that he will obtain entry into this year’s race in order to prove that size does not matter and champions can come in 10 lb. packages.

The similarities are astonishing… 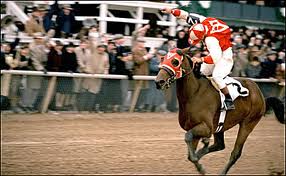 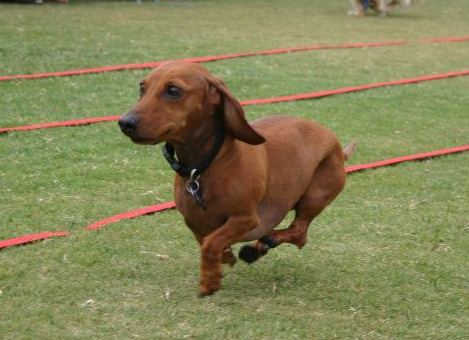 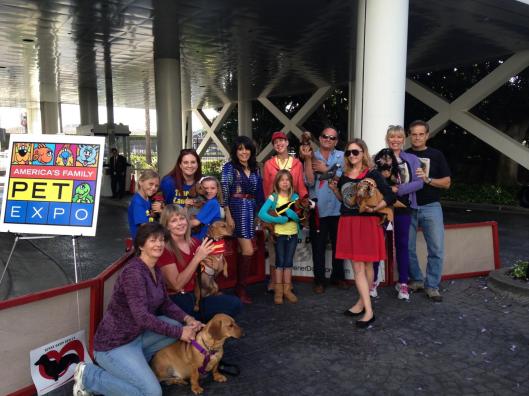 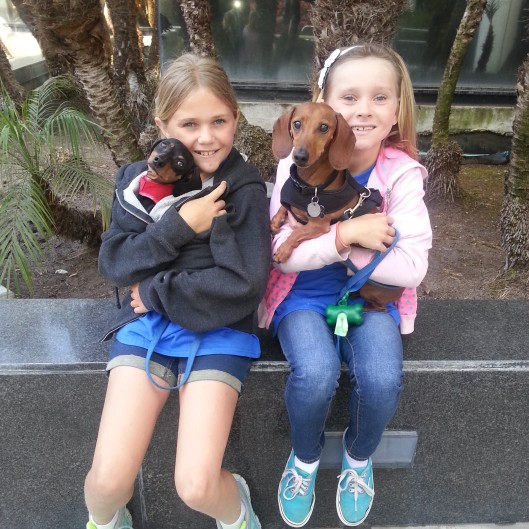 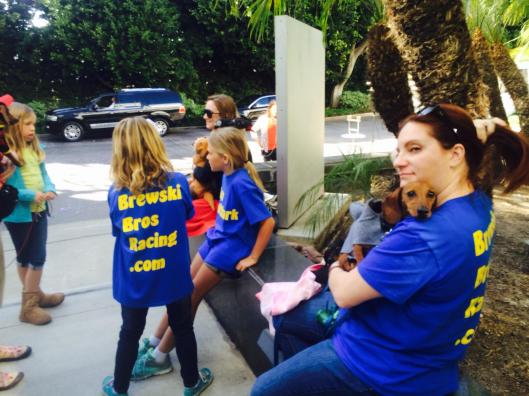 Hanging out waiting to race with LandShark 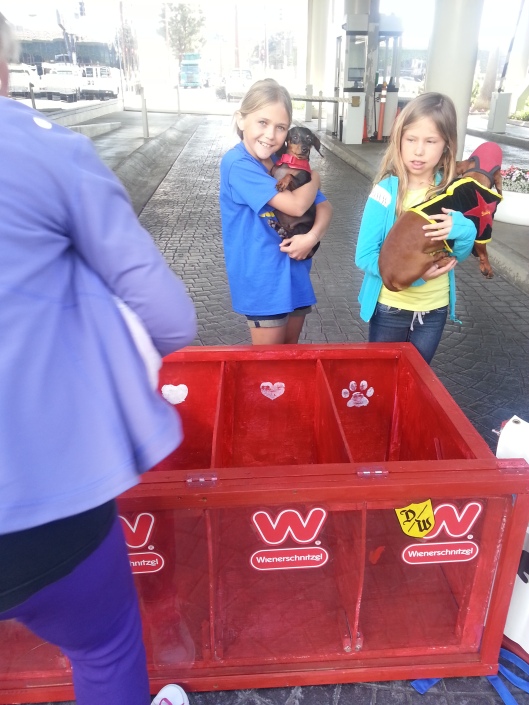 May 17, 2014 – So Cal Dachshund Relief’s Wild Wiener Round Up; Indian Village Park in Westminster, CA

~ LandShark & El Diablo (the most interesting Wiener in the world) 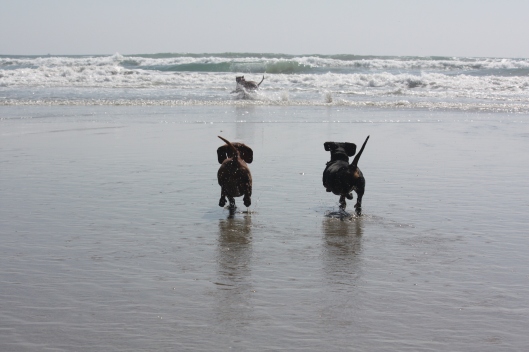 © Jennifer Brunner and Brewski Bros Racing, 2011 to 2019. Unauthorized use and/or duplication of written or photographic material without express and written permission from this blog’s author and/or owner is strictly prohibited. Excerpts and links may be used, provided that full and clear credit is given to Jennifer Brunner and Brewski Bros Racing with appropriate and specific direction to the original content.